#1 is true.  As we get older, we gradually lose muscle and thus, our physical strength also decreases.

#3 is false in my opinion.  In most cases, while some muscles are indeed weak and require strengthening, some other muscles are actually too strong and over-acting leading to structural and functional distortion.  Imbalanced strength and function of muscles results in unsmooth, non-coordinated movement which places excessive stress on our bones, ligaments, tendons, and other tissues. Thus, some muscles require rather relaxation to calm down in order to maintain fluent coordination and movement with other muscles. This is the main reason, I believe, why standardized, non-targeted back exercises commonly prescribed for low back pain fails to be the solution for many sufferers.

I believe that most back pain (including back conditions usually considered structural in nature such as disk herniation) is closely associated with both emotional stress* and functionality of our physical mechanics (muscle coordination), rather than structural strength of the body.  The issue of muscle coordination is further explained below as well as the importance of minimizing muscle distortions for preventing back problems. 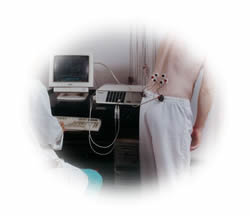 Muscles emanate an electrical signal upon contraction.  We are able to observe muscle firing patterns in real-time through surface electrodes attached to the skin using dynamic electromyographic (EMG) technique and analysis.

Top graph shows low back (left and right paraspinals) EMG activity of a male who performed the action of bending his trunk forward and returning to the upright position with his knees straight.  Trunk flexion return movement is a symmetrical movement of both left and right side muscles and therefore, each side of paraspinal muscles is supposed to fire synergistically at an approximately 1 to 1 ratio.  In this case, however, there is noticeable asymmetry between the left and right sides (the vertical axis indicates how intense the muscles are contracting).  Is it simply that the left side muscle is working harder and the right side muscle is taking advantage and being lazy?  In this particular instance, the reason for the asymmetrical use of two synergistic muscles is that the patient was experiencing low back pain on the side of low EMG activity (painful inhibition), therefore the paraspinal muscle on the other side was compensating during the movement.  This type of asymmetrical EMG pattern is quite commonly seen among patients with back pain, however it can also be observed among individuals who are not presently having back pain.  It may be attributed to prolonged, repetitive asymmetrical use of back muscles in a specific uniform way related to occupation, sports or simply lifestyle habits. If the situation continues, it may lead to injuries due to an excessive load on a particular muscle.  Analogous to a game of tug of war, it is like having a person on your team not participating while another is doing all the work. Bottom graph is an example of a synergistic muscle contracting pattern during trunk flexion and return movements with appearance of normal flexion-relaxation (FL) phenomenon. 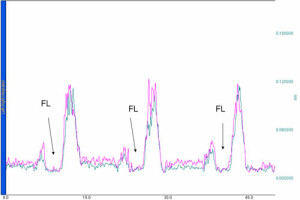 It is also important that muscles are able to relax during certain movements.  For example, when you bend your elbow to lift an object with your palm upwards, the biceps muscle is the primary mover and on the opposite side of the upper arm, the triceps (antagonist) should be relaxed (reciprocal inhibition).  When we monitor EMG activity during various movements, we sometimes see two muscles of different roles fire simultaneously (co-contraction), which places a tremendous amount of physical strain on the bones, tendons, and ligaments.  This is similar to two people holding an object but pulling in opposite directions.

These are two simplified examples of muscle coordination and it is important to keep them in mind when doing any strengthening or stretching exercises.  Some muscles may indeed be weak (or too lazy) and require strengthening but some other muscles may actually be too strong or unable to relax due to spasms or underlying neurological problems.

I have demonstrated the efficacy of acupuncture on muscle coordination in the study published in the International Journal of Neuroscience in 1998.

Decrease in left-right muscle activity asymmetries (relative values) during lumbar flexion-return movements was seen immediately following acupuncture in 9 out of 10 cases.  This was expected.  An interesting part of the findings however, was that the EMG of the lumbar muscle on the opposite side of acupuncture administration changed in an unexpected way (in this study, acupuncture was administered on only one side of low back muscle).  On the non-stimulated side, the absolute EMG values decreased for subjects with initially high baseline absolute EMG readings and increased for subjects with initially low baseline absolute EMG readings.  Those changes were robust and statistically significant.  This data suggests that acupuncture affects not only localized muscles where needles are inserted but also influences the muscle activities in other areas.  The exact mechanism was not determined by this study, however, I hypothesize that it is related to acupuncture having a specific influence on the sensitivity of muscle spindles (stretch receptor – sensor in the muscle which is part of an important reflex mechanism controlling the tonicity of muscle).  This intriguing result triggered new insights for treatment and prevention in sports related injuries using acupuncture.  When muscles fire in a more coordinated pattern, the movement becomes more smooth and efficient, which not only minimizes the chances of injury but can also greatly enhance overall performance.

Tips: Here is how you can prevent muscle distortion and imbalance:

Many popular sports such as tennis, golf, and baseball involve dominance on one side or unidirectional movements. If you are actively playing those one sided dominant sports, it is a good idea to also practice opposite directional movements as a part of your routine warm up and cool down exercises.  It is also a good idea to minimize one sided activities during your everyday activities.  It is important to check your workstation for proper ergonomics.  Some workstations are configured so that a worker tends to shift his/her body in one particular direction for many hours on a daily basis.  It is also best to avoid wearing a shoulder bag only on one side. Constant asymmetrical use of our bodies causes imbalance and distortion of muscles which places additional stress on our body structure, which can lead to injuries.

* To read more on how emotional stress can affect back pain, see https://acupuncture-treatment.com/lower_back_pain_sciatica.html.