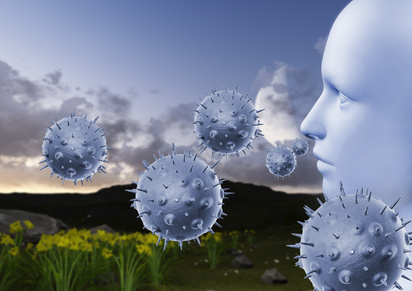 Acupuncture has been used for hundreds of years for all kinds of conditions.

In recent years, scientific studies have indicated how acupuncture can be helpful in treating everything from chronic pain to fertility. Acupuncture may also be useful in treating allergies.

Sometimes confused with the common cold, allergies are reactions to certain stimuli such as pollen or dust. Roughly 20% of all North Americans experience allergic reactions of some type. Allergies arise when the body is trying to rid itself of a given substance. Allergies can begin in childhood or adulthood, and either last a lifetime or decrease over time. In some cases, symptoms can be alleviated with acupuncture.

Substances such as pollen, mold spores, pet dander, household dust and/or dust mites, cigarette smoke, and bedding can trigger allergies. People can also experience allergies from the food they eat such as nuts or shrimp.

Allergic reactions take a number of different forms and people with allergies have been known to experience:

RELATED: Acupuncture Could Help You With Seasonal Allergies

Some allergy symptoms can be so severe they require immediate medical attention. It is still unclear why some people develop allergies while others living in similar environments do not. There is however, a strong genetic link to allergies and a person is more likely to develop allergies if family members have them.

Allergies are widespread. In fact, according to the American Academy of Allergy, Asthma, and Immunology, about one in five people in the United States have an allergy. Allergy symptoms can range from annoyance to life-threatening. Severe allergic reactions can lead to anaphylactic shock, which can be deadly.

The reason why some people develop allergies is not fully understood. But there does appear to be some risk factors. For example, people who have asthma have a higher chance of developing allergies. Having a family history of allergies also increases a person’s risk. Being exposed to cigarette smoke at a young age is also a risk factor. But in many instances, the reason why someone has an allergy is not known.

What Happens During an Allergic Reaction?

When you have an allergic reaction, you may experience a variety of symptoms, such as sneezing, runny nose, and itchy eyes. What happens is your body’s response to a substance, such as grass, as if it were harmful. The substance that triggers allergy symptoms is called an allergen. Your immune system goes into overdrive to kill the allergen as if it were dangerous even though it’s not.

The immune system response starts when you’re exposed to an allergen, and the body increases production of the antibody immunoglobulin E (IgE). IgE triggers the release of histamine, which is what causes the typical allergy symptoms that leave you feeling miserable.

Conventional Allergy Treatments and Side Effects

Conventional allergy treatment usually involves medication. Medications, such as decongestants, are used to treat symptoms, such as congestion and runny nose. Antihistamines are another type of allergy medication that may be used. Antihistamines block the production of histamine, which may prevent the allergic reaction.

One of the problems with allergy medications is that they do not prevent allergies or treat the underlying issue with the overreaction by the immune system. Medications may mask symptoms, but the allergy remains. Allergy medications also often cause side effects, such as sleepiness, dry mouth, and dizziness.

Allergy shots are also sometimes used to treat allergies. Allergy shots involve administering small amounts of the allergen through a series of shots given over several months. The goal of the shots is for the person to become desensitized to the allergen. Over time, a tolerance may be built up, which decreases the person’s allergic response to the allergen.

Although allergy shots may be effective for some people, they don’t work in every case. For example, some people have allergies to many different substances. Plus, allergy shots can be costly and time- consuming.

How Acupuncture May Help Allergies

One natural alternative to conventional allergy treatment is acupuncture. Acupuncture involves inserting very thin needles in specific locations, and looks at patterns in the body. Pressure points are stimulated where the needles are inserted. Stimulating certain points may modulate immune system function and correct imbalances that lead to allergies.

Research studies have indicated that acupuncture can play a role in decreasing allergy symptoms. For example, a study published in the American Journal of Epidemiology showed that people who had acupuncture experienced a greater reduction in allergy symptoms than those who just took antihistamines.

Although more research is needed to confirm how acupuncture may help, one theory is it may stimulate the production of IL-10, which is an interleukin that blocks histamine release. Studies also have shown that people who have regular acupuncture treatments had decreased levels of the antibody IgE, which triggers the allergic response.

One of the benefits of acupuncture for allergies is that it treats the underlying problems associated with an allergy, which is the production of IgE and histamine. Also, acupuncture does not have the unwanted side effects that allergy medication may have.

What to Expect with Acupuncture for Allergies

If it’s your first appointment with an acupuncturist, expect to answer several questions about your overall health and allergies. After assessing your situation, a treatment plan will be established. The plan may include a set number of acupuncture sessions.

While the needles are being inserted, you may feel slight discomfort, such as an ache. But most people do not feel pain. The length of time the needles stay in may vary. During this time, you’ll be encouraged to relax.

Acupuncture may not be effective for everyone with allergies. Treatment may also require several sessions or more. Keep in mind; allergy symptoms may not be 100 percent gone, but they may be reduced.