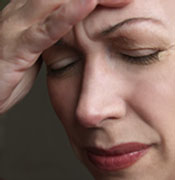 There are two different categories of headaches: primary and secondary. A primary headache is an actual clinical condition and not a symptom caused by another disorder. Primary headaches include tension-type headaches, migraines, and cluster headaches. Secondary headaches are caused by other medical conditions such as sinus disease, allergies, dental disorders, head injury, or brain tumors.

Here, I will discuss the mechanisms, unique characteristics, and treatment of disabling headaches ? migraines, and how they can be treated with acupuncture.

Characteristics of the two most common primary headaches

(Based on the International Headache Society Guidelines [1]) 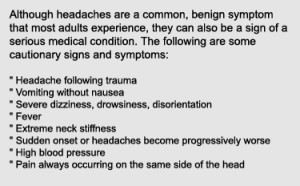 What is the relationship between the autonomic nervous system and headaches?

When our bodies are subjected to prolonged periods of stress, a chronic dominant state of sympathetic activity and/or suppressed parasympathetic response results. This occurs because the body shifts to an increased sympathetic response to deal with the stress appropriately. Eventually this can lead to the development of symptoms such as neck and upper back stiffness, heaviness behind the eyes, and tension-type headaches. In addition, other symptoms may include anxiety, palpitations, irritability, and digestive problems such as bloating or constipation. During the development of this chronically sympathetic-dominant state, circulation is minimized to the internal organs including those carrying blood to the head, due to the constriction of the blood vessels.

When local vasoconstriction becomes excessive, the body responds by releasing specific neuropeptides (CGRP, substance P, and neurokinin A), causing a rebound dilation in the segments of these overly constricted arteries. This sudden rebound dilation is a natural defensive mechanism of our body to compensate for extended periods of blood deprivation. These arteries are wrapped with sensitive pain receptors and are being activated due to dilation of arteries, thus causing migraine pain. The migraine pain is often localized because over-dilation occurs in a limited area. It is often throbbing and stabbing because each time the heart pumps blood into the artery, there is an expansion of the artery which aggravates the pain. When the heart rests, the artery partially constricts resulting in a relief of pain. The entire cycle produces throbbing pain.[5]

Is a migraine part of a healing reaction?

As explained above, chronic states of sympathetic dominance result in constriction of blood vessels. Many patients with migraine complain about cold hands and feet, which are one of the typical signals of a lack of circulation due to stress. Compromised circulation, due to constriction of blood vessels, not only occurs in hands and feet, but also in those carrying blood to the head and internal organs. If this situation is prolonged, the body enters into a sudden emergency state due to oxygen and nutrient deprivation to the internal organs (especially the brain). The body seeks to compensate for this by creating a rebound response. This is a natural, innate recovery response. In fact, a group of prominent Japanese MDs now view and treat migraine as a healing pain [6]. Sudden recovery process following psychological stress is known as vagal (parasympathetic) rebound (i.e, acute slow down of heart rate following racing of heart).[7] Prof. Abo at the Niigata University Medical School believes that migraines are a necessary recovery process from the compromised circulation due to chronic stress, and considers it to be a part of the vagal (parasympathetic) rebound response.

This theory explains the many unique characteristics of migraine attacks which often develop when one is relieved from a situation of prolonged stress (an increased sympathetic state shifted to a rebound type of parasympathetic dominant state). For example, many migraine sufferers often develop migraines on weekends, the first day of vacation, following a relaxing dinner at the end of a stressful day, or after sleeping-in on Sunday mornings.

Many migraine sufferers also experience attacks in low air pressure environments such as rainy weather, airplane trips, or climbing to high mountains. This phenomenon can also be explained by the parasympathetic rebound theory described above. It is known that the body is shifted more towards the sympathetic dominant state when in high air pressure (i.e; sunny days) and shifted to the parasympathetic dominant state during low air pressure such as on rainy days and in high altitude. Many sufferers also note the occurrence of migraines when they skip meals. It is known that the autonomic nervous system sharply inclines toward sympathetic mode during the state of hunger. The sharp inclination towards the sympathetic nervous system by skipped meals can induce a parasympathetic rebound response (this is evident by the fact that some individuals experience stomach pain or cramps before meals, due to increased gastric acid secretions and digestive motility by enhanced vagal/parasympathetic stimulation). It should also be noted that the autonomic nervous system closely interacts with female hormones. Many women with migraines often experience more headache episodes around the time of menstruation. Contraceptive pills are one common known trigger for migraines occurrences.

The migraine theory, based on an exaggerated autonomic nervous system reaction, known as parasympathetic rebound, can be applied to other various health conditions such as asthma, irritable bowel syndrome (IBS) and eczema. For example, a study indicated that among asthmatic patients, there were actually less airway obstructions during stress visits than non-stress control visits. Further, an exacerbation of asthma is often not during stress, but following severe stress events. [8]. Over the years in my practice, I have been intrigued to observe that many migraine patients concurrently have one or more of these conditions.

Many sufferers also experience some of their most intense migraine episodes following a massage treatment. This is not surprising considering that massage and many other natural therapies including acupuncture can trigger the healing reaction by eliciting a relaxation response and enhancing circulation. On the other hand, it should be kept in mind that when it comes to migraine, any therapy that provides some immediate pain relief may not necessarily be the best treatment for long-term management of migraine.

Although, in most cases, the pain due to relaxation and enhanced circulation is a positive response from a physiological perspective, it is certainly not a pleasant experience for patients. Experienced practitioners, who understand the unique physiological mechanism of migraines, would alter the treatment protocol accordingly depending on the patient?s condition on that day, with consideration of both short and long-term treatment goals. 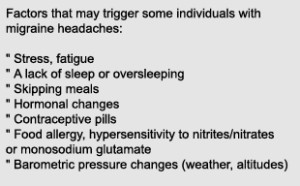 What is the pharmacological approach to a migraine?

Two different types of medications are often prescribed: Medication to relieve acute migraine pain and medication to prevent migraines. The actions of the two medication types are quite different.

For acute attacks, medications such as Imitrex, Maxalt, Zomig, and ergotamine (Cafegot) are often prescribed. These medications have a potent vasoconstricting action (constricting blood vessels) and patients are instructed to take them during or at the onset of a migraine. This approach can provide excellent relief of symptoms, but the effect is temporary and will not prevent the recurrence of migraines.

For migraine prevention, beta-adrenergic receptor blockers (which inhibit part of the sympathetic nerve activity) such as metoprolol, atenolol, propranol, calcium channel blockers such as flunarizine, or antidepressive agents such as amitriptyline are often prescribed. Most medications for migraine prevention would produce a general relaxation effect.

Both types of migraine medications are not without side-effects. Vasoconstrictor medications to treat acute migraine can have serious detrimental effects particularly for patients with cardiovascular risk [9]. In addition, frequent use of these pain medications can create further grounds to more frequently induce migraine episodes. It should be noted that many commonly used over the counter headache medications (NSAIDs) can also create a sympathetic dominant state and inhibit peripheral circulation, thus leading to a rebound headache. Beta blockers are most commonly used to treat high blood pressure. Beta blockers are contraindicated in patients with asthma, chronic obstructive pulmonary disease, insulin-dependent diabetes mellitus, heart block or failure, or peripheral vascular disease [10]. Common side effects associated with them include fatigue, dizziness, gastrointestinal discomfort and decreased sexual ability. Preventative medications cannot be expected to work immediately, some take 12 months to work, especially calcium-channel blockers [10].

Tension-type headaches are often associated with chronic neck and upper back muscle tension. In fact, a research study of tension-type headache sufferers showed a strong correlation between headache intensity and the degree of upper trapezius muscle tension as measured by electromyography[11]. Since acupuncture treatments can induce potent muscle relaxation effects (both general and local), most patients experience relief during, or immediately after the acupuncture session as demonstrated in our study[11]. 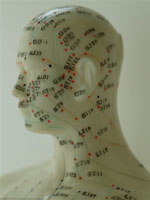 Compared to tension-type headaches, treatment during migraine attacks requires extra care and consideration. The relaxation response typically induced by the therapy may trigger or intensify the migraine for the reasons previously discussed. For migraine treatment, it is rather important to shift our focus to prevention by avoiding accumulating stress and minimizing the continuous hyperexcitation of the sympathetic nervous system in order to prevent eliciting the exaggerated parasympathetic rebound response. Theoretically, if the predevelopment stage of the migraine involving excessive vasosconstriction can be prevented, the entire headache episode can be avoided all together.

Irrespective of using conventional or natural alternatives, it is important to note that treatments that are only focused on immediate pain relief are the least likely aid to decrease and eliminate future migraines. It is important that both the patient and the practitioner understand the true cause and physiological mechanism behind the migraine for long-term success.

See the illustrations below, which explain the migraine development mechanisms (Fig.1) and how successful stress management can lead to a decrease in the frequency or intensity of migraine or eliminate future migraine episodes(Fig.2). 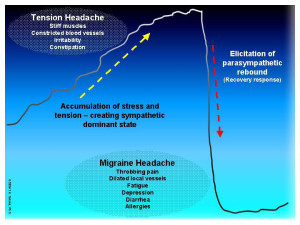 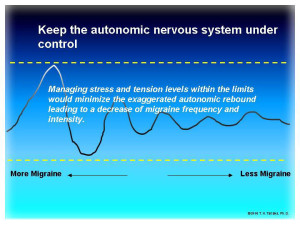 Successful recovery from sciatica due to disk herniation.