Golfer’s elbow is quite similar to tennis elbow except the inflammation occurs on the inside of the elbow, around the bone called the medial epicondyle. It too can be treated with acupuncture. Golfer?s elbow is also referred to as medial epicondylitis. The inner part of the elbow becomes painful and tender as a result of damage or tearing of the tendons and muscles of this area. 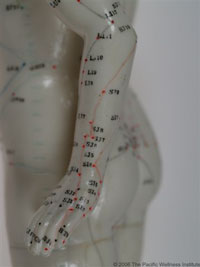 The terms Tennis Elbow and Golfer’s Elbow are misleading because most people don?t develop them from playing tennis or golf. The conditions are often brought on by overused or strained muscles, which in turn leads to the inflammation. Activities such as painting, raking, pitching and hammering involve repetitive arm movements that overuse and strain the muscles of the elbow.

Sometimes the conditions can be the result of a single injury or, they can be brought on from other conditions such as arthritis. The problem may be due to problems in the neck, or there may be no explanation for the inflammation at all. Usually, however, any activity that involves excessive force or repetition when gripping, twisting or reaching can trigger tennis or golfer?s elbow. The latter can be treated by the acupuncturist.

Resistance Test (Cozen?s test). This test is used to determine whether the pain gets worse when you bend your wrist back (extend it) against resistance. Small tissue damage around the elbow tendon attachment of the Extensor Carpi Radialis Brevis (the muscle that runs from the lateral epicondyle to the middle finger) can be found in many tennis elbow cases. In those cases, the patient will feel sharp shooting pain in the elbow by extending his/her middle finger against resistance.

Tenderness. Here we test for tenderness over or near the bony bump on the outside of the elbow. In the event of both these signs being present, it is likely that you have tennis elbow.

Grip Strength. Patients are asked to grip the dynamometer and stop as soon as pain is felt in the elbow (pain-free grip power), then grip with maximum power despite any pain (maximum grip power). Tennis elbow sufferers usually show a decreased maximum grip power and a large difference between pain free and maximum grip.

It is also important to examine your neck and upper chest regions, as factors in these areas may be fully or partly causing your pain.

What is the treatment?

The conventional approach often involves physiotherapy treatments, use of anti-inflammatory drugs, and may include an injection of a small dose of steroid to the affected area.

Is there any natural alternative treatment?

Acupuncture and moxibution treatment is used in order to decrease the hyper-tonicity of common extensor muscles.

In some acute cases, cryo (ice) massage is applied around the lateral epicondyle. After acute inflammation has subsided, the massage technique called transverse friction is often incorporated to break down the existing scar tissues around the tendons and restore normal tissue health.

Is there anything, besides the treatment, I can do or shouldn?t do?

How about vitamins or herbs?

Certain nutritional supplements are helpful in decreasing the inflammation around the tendons and in repairing of soft tissues. I will provide my recommendation at the appropriate time in the course of your recovery.