The Modern and Traditional Eastern Theory of Acupuncture

Acupuncture was developed on the understanding that there are twelve main channels, or “regular meridians” running vertically across and throughout the human body connecting the internal organs. It is a tenet of acupuncture that Qi flows along these meridian lines. Qi is somewhat equivalent to the western idea of vitality or life-force.

The operating philosophy of traditional acupuncture is that disease is caused by interrupted energy flow at specific points on the body’s surface. Acupuncture thus involves the insertion of a needle(s) at the affected point(s) in order to stimulate Qi flow and harmonize energy flow in the body.

How does traditional acupuncture translate into our modern medical understanding? Researchers are examining through Western mechanisms how acupuncture brings about physiological change.

Scientific research into acupuncture in the last 25 years has brought a general advance in the understanding of neurophysiologic & neuropharmacologic pain relief mechanisms as they relate to acupuncture (the endorphin theory, the gate theory, and DNIC (diffuse noxious inhibitory control) theory). Evidence indicates that acupuncture stimulates the release of brain chemicals such as endorphins that function to relieve pain. Research shows that acupuncture strengthens the immune system, improves circulation, decreases muscle tightness, and increases joint flexibility.

Most studies on acupuncture have focused on a strong, deep needling-technique to produce neurophysiologic and/or neuropharmacologic responses. In the traditional Chinese method, it is the inducement of de-qi sensation that is emphasized to achieve positive results. Melzack and Wall, co-authors of ‘The Challenge of Pain’, even suggest that, based on their studies, the importance of intense acupuncture stimulation to induce analgesia should not be underestimated. Many Japanese practitioners use very fine needles and utilize a gentle, shallow needling technique, which has been clinically demonstrated to produce positive results.

Until recently, few studies had investigated the physiological effects of this superficial stimulation technique. A series of experiments carried out by Prof. Kazushi Nishijo’s group at the Tsukuba College of Technology in Japan clearly indicate the marked response in autonomic function following specific superficial needling. Their experiments indicated that superficial needling during exhalation in a sitting position induces a consistent parasympathetic response. The action of acupuncture synchronized with the patient’s physiological state produces a greater response in parasympathetic activity. our experiment of 1994-96 clearly indicates the significance of superficial needling in EMG activity. 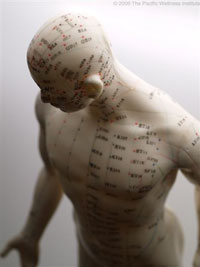 The study also provides a partial explanation of pain relief and the mechanism of action behind superficial needling. It is also important to note that a reduction in EMG activity greatly varies according to whether or not the stimulation is applied during the exhalation phase in the patient’s breathing cycle or during continuous breathing.

Tanaka has been successfully utilizing SSE in his own clinical practice and he has noticed that only a small amount of stimulation is actually needed to induce the maximum therapeutic benefits if the patient’s biological rhythms are positively utilized. Huang Di Nei Jing (The Yellow Emperor’s Classic of Internal Medicine), an ancient Chinese medical text, is so specific that it instructs practitioners to vary point selection and depth according to the season and time of day.

It also notes the importance of considering the respiratory phase during needling and the direction of the needle’s insertion. Very few acupuncturists today, however, follow the text’s specific directions. This may be due to the philosophical nature of the Huang Di Nei Jing’s claim. Physicians of old recognized the importance of the above-mentioned factors in acupuncture treatment through their own experiential observations. Successive acupuncture methodologies have been accumulating for many generations and can be described in toto, as ‘Empirical’ medicine.

It is, however at this time, necessary to re-evaluate techniques and methods scientifically to form a solid practical foundation. As demonstrated by recent studies, the effectiveness of acupuncture depends not only on point selection and needle depth, but also on the patient’s respiratory phase, posture and other more complex variables.
A great deal more research is necessary to further understand the mechanisms of acupuncture. 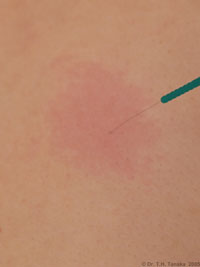 It is well known that many diseases and disorders result from the disturbance of blood flow. Maintaining proper circulation is vital to our health. Research studies have demonstrated that acupuncture stimulation improve blood flow to the skin, muscle, brain, and various other internal organs.

This photo depicted was taken 5 minutes after the insertion of an acupuncture needle. It clearly shows a red circle around the needle. This skin color change known as the flare response is an indication of an increase in local skin temperature and enhanced circulation due to small blood vessel dilation. Somatosensory stimulation such as acupuncture causes the release of vasodilative substances such as calcitonin gene-related neuropeptide (CGRP) and substance P through the mechanism of the axon reflex.

The acupuncturists at the Pacific Wellness Institute in Toronto are part of the vanguard in scientific acupuncture. The clinic’s director, Tim Tanaka, Ph.D. has ongoing research studies exploring which techniques are most effective and obtain the quickest results. He combines traditional techniques with his own research advancements and extensive clinical experience, to optimize your health and recovery.