We have received many inquiries regarding acupuncture styles. In response, we have summarized below the most popular acupuncture systems used in North America.

Over the past few thousand years, acupuncture has developed, through a rich tradition of trial and error, into an empirical (meaning “based on observation and/or experience”) branch of medicine. In the United States and Canada, many different styles and techniques of acupuncture have been introduced, including but not limited to traditional Chinese medicine acupuncture, Japanese acupuncture, electroacupuncture, auricular acupuncture, trigger point acupuncture, and Korean hand acupuncture. Many acupuncturists today incorporate a variety of techniques and treatment styles to create their own unique protocols. Please keep in mind that exceptions to the rule always exist; the following information is provided in order to give readers a general idea of the many different acupuncture styles in use.

The foundation and basis of acupuncture developed in China over thousands of years (see also History of Acupuncture). The traditional Chinese medicine (TCM) style is by far the most common system of acupuncture taught and practiced in North America today.

While the term “traditional” might suggest otherwise, TCM acupuncture is a relatively new style of acupuncture developed in the People’s Republic of China after 1949. Many TCM practitioners in China and other countries utilize not only ancient techniques but also modern techniques such as electroacupuncture, in conjunction with other recent and older techniques. 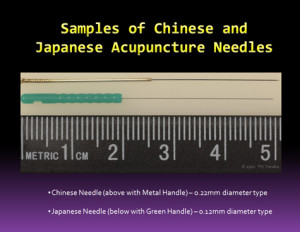 Chinese acupuncture was introduced to Japan about 1,500 years ago. The basic principles, including the idea of meridians, remained the same as in the Chinese meridian system. However, in general, Japanese practitioners use finer needles, stimulate more superficially and gently, and often do not consider the strong de-qi sensation (a sensation of numbness, heaviness, or distention at the area of needle insertion) to be of primary importance.
Traditional diagnostic techniques used by Japanese practitioners are also the same as in TCM, although the technique’s emphasis can be slightly different.

One of the most notable Japanese contributions to the field is the development of Kanshinho, a guiding tube insertion method developed by the famous seventeenth-century blind acupuncturist Waichi Sugiyama. The guiding tube method, which drastically decreases the pain associated with the initial insertion of the needle, is now utilized by practitioners worldwide.

Many Japanese acupuncturists use moxibustion (traditional heat therapy). Although moxibustion is an integral part of the original concepts of classical acupuncture, it has not been taught in depth in the Western acupuncture educational and training system. 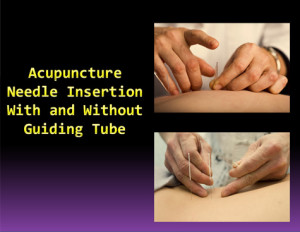 Acupuncture is recognized as a profession in countries such as China, Korea, and Japan. The training programs in those countries are comprehensive and are designed to produce licensed acupuncture specialists. In many Western countries however, acupuncture is viewed as a technique or modality. Brief training programs are available to medical professionals such as physicians, chiropractors, and physiotherapists. Medical acupuncture courses focus primarily on biomedical, anatomically based acupuncture, and are often offered in a format of weekend-long seminars.  Naturopaths in certain jurisdictions such as Ontario, however, learn some elements of acupuncture within their school curriculum; at the same time, they also learn a variety of other treatment modalities including vitamin therapy, nutrition counseling, homeopathy, spinal manipulation, massage, physical therapy, herbal medicine, psychology, and the like.

Many health care practitioners who have some training in acupuncture use acupuncture as an adjunct treatment modality that supplements their main area of expertise. Moxibustion is rarely used by medical acupuncturists.

Which Acupuncture Style is Best for You?

The answer to this question really depends on your treatment needs and personal preferences.

As mentioned, most acupuncturists today utilize a combination of various acupuncture styles and techniques. Further, since standardized acupuncture training programs are unavailable in many regions, every acupuncturist has his or her own unique training background and skills.

You are encouraged to try out different qualified acupuncturists until you feel that you have found the right one for you and your treatment needs.
Here is a link to some useful information on choosing an acupuncturist:

Because electricity did not even exist during most of acupuncture’s history, electroacupuncture is, as you might imagine, a technique that has only recently come into use. Electroacupuncture has become increasingly popular since the 1970s, mainly as a form of pain relief. Electroacupuncture is commonly practiced by medically trained acupuncturists (physicians, physical therapists, chiropractors, etc.) and is also used by traditional Chinese medicine practitioners.

In the United States, the efficacy of electroacupuncture treatment has been studied for a variety of conditions. Electroacupuncture is often the preferred form of acupuncture among researchers simply because the type and amount of stimulation administered to each subject can be much more easily standardized among acupuncturists in comparison to classical manual acupuncture.

For technical and safety reasons, the needles used with electroacupuncture are larger in diameter (>0.20mm) and are inserted into a sufficient depth of the tissue. Electroacupuncture should not be used on patients who have a history of seizures or heart disease, or on patients with pacemakers. 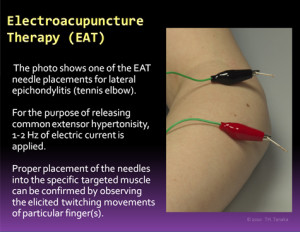