Moxibustion is a form of fire heat treatment that stimulates specific acupuncture points of the body. The term is derived from the Japanese “mogusa” meaning herb (mugwort) and the Latin “bustion” meaning burning.

There are various moxibustion techniques.

Click the image to view the demonstration of direct moxibustion

Indirect moxibustion: Currently, the more popular form of moxibustion in many countries including China is the indirect form, because there is a much lower risk of pain or burning. In indirect moxibustion, a practitioner lights one end of a moxa stick (roughly the shape and size of a cigar) and holds it an inch or two away from the skin, usually around the inserted needles to bring mild warmth to the area without burning, until the skin becomes slightly red. The intensity of the heat is adjusted according to the patient?s condition and comfort. Indirect moxa is considered to induce a gradual localized vasodilatation response. In addition to increasing the local blood flow, skillful indirect moxibustion is extremely comforting and can create a deep relaxation response.

Click the image to view the different types of indirect moxibustion

Needle Moxa Technique: This technique used to be quite popular in Japan. With the needle moxa technique, the heat intensity is much harder to control than the moxa stick method. Contrary to commonly held belief, moxa heat conducted through the needle is very minute and insignificant. Most of the heat is actually through reflective heat just like the moxa stick method.

Click the image for a closer look at Needle Moxa

Where did moxibustion originate?

Moxibustion is believed to have originated in the northern part of China. In Mongolia, where winters are dominated by icy chilliness and wind, moxibustion has been used to treat various illnesses and degenerative diseases due to the extreme cold climate.

What is moxibustion good or not good for?

Moxibustion therapy in conjunction with acupuncture can be very effective for many diseases and conditions including back pain, muscle stiffness, headaches, migraines, tendonitis, arthritis, digestive disorders, anxiety, and female health problems such as menstrual cramps, irregular periods, and infertility.

However, it should be noted that moxa, especially direct moxa, is generally not recommended for patients with diabetes, decreased sensitivity to pain, who are on certain medications such as prednisone, or who have any other conditions involving compromised circulation or a weakened immune system.

Why is moxibustion such an integral part of acupuncture practice today? 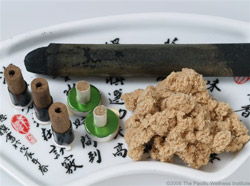 Up until this century, before the advancement of ‘modern medicine’, acupuncturists played the role of physician in China and Japan. The patient population at acupuncture clinics was quite different in those days, consisting of many people with acute life threatening illnesses such as serious infection, systemic inflammation, and communicable diseases. These illnesses are typically ‘heat syndrome’ in traditional Chinese medicine terms manifested by noticeably high fever.

Today, patient populations are quite different compared to in the past. Rarely, acupuncturists encounter serious acute conditions but rather most patients visit with chronic pain conditions, functional disorders, or a variety of stress related illnesses. In the majority of those chronic conditions, the patients have a cold constitution. Even some patients who appear to be manifesting heat, really have underlying chronic cold in their system which creates the heat-syndrome-like symptoms as their body tries to balance.

Why do more people have cold constitutions now than in the past?

A cold constitution is triggered or aggravated by over cooling of our body systems. Due to technological advancement, we are exposing our systems to cold of a much higher magnitude than in the past. Two such examples, both of which did not exist in the past, are wide spread use of refrigerators and air conditioners in almost every office and household. Many people are regularly drinking a large amount of icy cold beverages and their favorite ice cream. Air conditioners certainly make our lives more comfortable in hot summer days and nights, however we are then exposed to cold winds not only in winter but year-round. Unlike in the past, cold constitutions are not commonly seen in the cold climate regions only, but anywhere in the modern world including the southern tropics. Furthermore, it should also be noted that many pharmaceutical drugs including common over the counter pain medications are known to decrease body temperature. Other common causes of cold constitution are large consumption of fruits and raw vegetables and ongoing mental/emotional stress.

More so than in the past, people today are in fact having a cold constitution based on eastern medical diagnosis. The burning of moxa is believed to expel cold and to warm the meridians, leading to the smoother flow of blood and qi.

Moxibustion has been used in tandem with acupuncture to treat a variety of diseases throughout Asia for thousands of years. In fact, the actual Chinese character for what we routinely call acupuncture is Zhen Jiu (or Shin Kyu in Japanese), translated literally, it means “needle-moxibustion.” Moxibustion, which is so integral to the original concepts of acupuncture has not been taught in depth in the Western acupuncture education and training system. Thus, a number of practitioners today practice acupuncture using the needling method only. Using one without the other is like playing the piano with just one hand.

Although moxibustion has been an integral part of the original concepts of acupuncture, I was surprised to learn that it is somewhat ignored by many acupuncturists in Western countries. A growing number of Canadians have experienced acupuncture, yet only a few have ever tried moxibustion treatment.

Why has this strange phenomenon occurred in North America? Read More

What type of Moxa therapy is used at The Pacific Wellness Institute, Toronto?

Acupuncturists at The Pacific Wellness Institute use indirect moxibustion which provides gentle soothing heat without causing damage to the skin. The patients are advised to tell the acupuncturist in case the heat is too intense at any time during the treatment. The gentle heat is so comfortable and soothing that many patients fall asleep during moxibustion with acupuncture.

How is Moxa therapy used at The Pacific Wellness Institute, Toronto?

Almost all of the patients receiving acupuncture at The Pacific Wellness Institute are simultaneously treated with moxibustion therapy. We have observed many clinical successes using moxibustion therapy for a variety of illnesses and conditions such as neck pain, low back pain, headaches, anxiety, constipation, diarrhea, IBS, infertility, and sports injuries.

The following is a brief summary of moxa production process traditionally used in Japan. Read more…