It was commonly thought that acupuncture originated in China , but recent evidence indicates otherwise. The true source of acupuncture may have been Central Europe.

While there is no doubt that the foundation and principles of acupuncture were formulated in China, recent evidence suggests its origins lay elsewhere.

In the October 1998 issue of “Science” journal, a report on the Tyrolean Iceman, by far the oldest known European mummified human body (5200 years old), reveals the presence of 15 well-preserved tattoo groups on his back and legs. The location of the tattoos very closely corresponds to known acupuncture points, along the Urinary Bladder Channel. This meridian is often used for the treatment of back pain. Computer tomography indicates the iceman suffered from arthrosis of the lumbar spine. This finding suggest the possibility that therapeutically intended acupuncture originated in central Europe long before its development in ancient China. 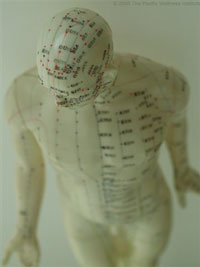 During the 6th Century, improved transportation and communications within the Asian Continent led to the introduction of Chinese medicine to Japan, and along with Buddhism came in the form of religious medicine.

In the 17th century, Waichi Sugiyama, in search of a simple, painless and speedy insertion method, developed the insertion tube, a small cylindrical tube through which the needle is inserted. This insertion method is still used today by practitioners worldwide, and in Japan by over 90% of the acupuncturists.

Japanese acupuncture has been well established as the primary form of health care for over a thousand years. An acupuncturist’s role was comparable to that of a modern physician. When Dutch and German medicine was introduced in the 19th century, the Western modality of medicine quickly became the dominant medical practice.

Today in Japan, acupuncture remains an integral part of the health care system, offered in conjunction with medicine. In North America, acupuncture has grown into what is now a common form of pain management therapy in many clinics and hospitals. The Washington Post reported in 1994 that an estimated 15 million Americans, or roughly 6% of the American population has visited an acupuncturist and has tried acupuncture for a variety of symptoms including chronic pain, fatigue, nausea, arthritis, and digestive problems.

In 1995, the U.S. Food and Drug Administration (FDA) classified acupuncture needles as medical instruments and assured their safety and effectiveness.

The medical community for the most part now accepts acupuncture and a growing number of medical schools, such as UCLA, include acupuncture training in their curriculum.

In 1997, the US National Institute of Health issued a report titled: “Acupuncture: The NIH Consensus Statement”. It stated that acupuncture is a very useful method for treating many conditions. It acknowledges the side effects of acupuncture are considerably less adverse than when compared to other medical procedures such as surgery or pharmaceuticals. In addition, the NIH made the recommendation to U.S. insurance companies to provide full coverage of acupuncture treatment for certain conditions. This momentous advancement in the status of acupuncture in the United States has certainly influenced its status elsewhere in the world, including in Canada.

In 1997, the Ontario Medical Association officially recognized acupuncture as a ‘complimentary medicine’, acknowledging its broad success in treatment. As acupuncture becomes increasingly accessible to more Canadians, Doctors recommend it more and more as an effective relief for many medical conditions.

Acupuncture treatment is included in many Insurance plans. It is a sure sign of acupuncture’s acceptance into the mainstream. It is also an indicator of its success.