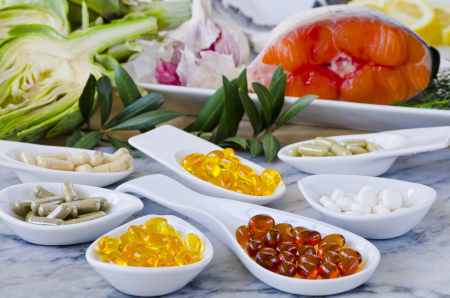 Eating a well-balanced diet is one of the most important things you can do for your health. Most of us probably slack a little from time to time and don’t get all the necessary nutrients. But for some people, their ting habits can lead to a nutritional deficiency.

Vitamin D is an essential nutrient, which helps keep your bones strong and decreases your risk of fractures. But that’s not all. Vitamin D also plays a role in proper immune system function. Symptoms of a vitamin D deficiency include bone and back pain, frequent infections, and fatigue. Impaired wound healing, hair loss, and muscle ache may also occur.

Who is at risk? There are several risk factors for a vitamin D deficiency including staying mostly indoors, being overweight, and not drinking milk or eating dairy products.

How much do you need? Adults need about 600 IU/day (international units) of vitamin D to maintain strong bones.

What can you do? Your body makes vitamin D when your skin is exposed to the sunlight. Spending a few minutes each day in the sun can help prevent a deficiency in vitamin D. Foods high in vitamin D include salmon, tuna, and milk.

According to Harvard Medical School, about four percent of people in the United States may have a vitamin B-12 deficiency and about 20 percent may be borderline deficient.

Vitamin B-12 is needed for several reasons. For instance, it plays a role in the production of red blood cells. It is also essential for your nervous system to function properly. Without enough vitamin B-12, symptoms such as weakness, dizziness, and mood changes can develop.

Who is at risk? Older adults are at an increased risk of developing a vitamin B-12 deficiency. People who stick to a strict vegan diet and those who have had weight loss surgery are also at risk.

How much do you need? The National Institute of Health’s Office of Dietary Supplements recommends that adults get 2.4 micrograms of vitamin B-12 every day.

What can you do? Vitamin B-12 is found in several types of animal food, such as red meat, eggs, and poultry. For those who do not eat animal products, some breakfast cereals are fortified with vitamin B-12. Supplements are also available.

Iron is needed for the production of hemoglobin, which helps red blood cells carry oxygen throughout the body. Unfortunately, many of us do not get enough iron. According to the World Health Organization, iron deficiency is the most common type of nutritional deficiency worldwide. The most common symptom of an iron deficiency is anemia. Anemia causes fatigue, brittle nails, and pale skin. Chest pain, poor appetite, and cold hands and feet may also occur.

Who is at risk? Blood contains iron. Any condition that causes a lot of blood loss, such as a peptic ulcer, colon polyps and heavy menstrual periods can increase your risk of an iron deficiency. Women and vegetarians have a higher chance of developing a deficiency.

How much do you need? The amount of iron you need depends on your age and gender. Women who have not reached menopause need more iron than men due to monthly blood loss. Men need about eight milligrams of iron a day. Women need about 18 milligrams daily.

What can you do? Eating foods high in iron can help prevent a deficiency. Good sources of iron in your diet include red meat, seafood, and pork. For people who do not eat meat, peas, beans, and fortified cereal are also rich in iron. Women who have very heavy menstrual periods should talk to their doctor about an iron supplement.

According to the National Institute of Health, magnesium is needed for a wide variety of functions throughout the body. Magnesium helps with protein synthesis, blood sugar regulation, and energy production. Symptoms of a magnesium deficiency include nausea, vomiting, and weakness. In cases of severe deficiency, muscle cramps, mood changes, and abnormal heart rhythms can develop.

Who is at risk? Although anyone can develop a magnesium deficiency, people who have gastrointestinal disease, diabetes, or alcohol dependency are at an increased risk.

How much do you need? Adult men need between 400 and 420 mg of magnesium a day. Women need between 300 and 320 mg daily and about an additional 40 mg when they are pregnant.

What can you do? Magnesium is easy to incorporate into your diet. Typically, foods that have fiber also contain some magnesium. For example, leafy green veggies, such as kale and spinach, are good sources. Legumes, seeds, and nuts are also rich in magnesium.