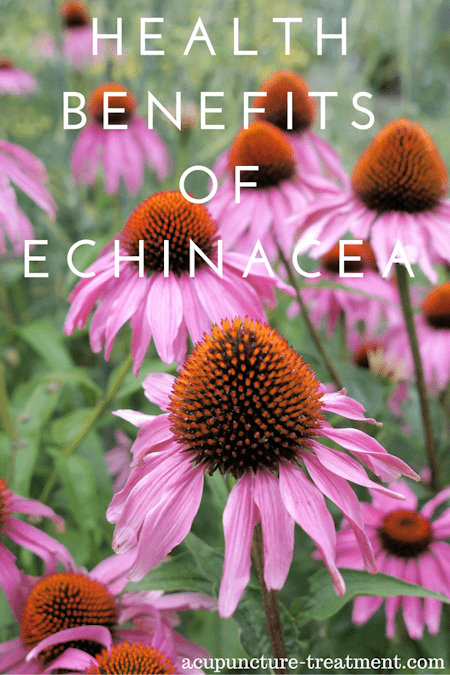 All species of the Echinacea plant (also called American Coneflower, Black Sampson and Black Susan) are native to North America. All parts of the plant are seen to have medicinal value and are available in extracts, juices, teas, tinctures, tablets, capsules and ointments.

A perennial herb of the daisy family, its nine species grow to 1 to 2 feet (20 to 30 centimeters). Commonly called purple coneflowers, the Echinacea blooms large showy heads of composite pink to purple flowers. The name derives from the prickly scales in the conical dark brown to red seed heads that resemble the spines on a hedgehog or sea urchin.

The Native Americans used Echinacea as a traditional herbal remedy more than 400 years ago to treat infections and wounds, and as a universal ‘cure-all’. Settlers adopted the use of the Echinacea and it became widely accepted and utilized. The introduction of antibiotics and lack of scientific evidence to back its value led to a steep decline in its use.

Recently, the Echinacea has regained popularity, in part because some antibiotics are shown as losing their effectiveness against particular types of bacteria. Additionally, there is a new up-trend in using traditional remedies to maintain wellness.

The Echinacea is thought to help decrease inflammation; relieve pain; stimulate the immune system; exhibit hormonal and antioxidant effects; and directly act against yeast and other types of fungi. These properties account for the long list of uses to which the plant is applied.

Uses include fighting infections – usually the common cold, the flu and other upper respiratory infections, where it is thought to reduce symptoms, such as sore throat, cough and fever. Gum disease, tonsillitis, streptococcus infections and ear infections are also treated by Echinacea. Other infections treated with this herb are urinary tract infections, and vaginal yeast infections.

Many intensive reviews have shown that Echinacea by-products do not usually present side effects. In the rare cases when side effects were observed, they were both mild and reversible.

Traditional use and scientific studies have shown the versatility and usefulness of the Echinacea plant. Professional herbalists, however, feel that we have yet to tap into the full potential of this amazing plant.